Recently I faced a problem when I was playing with the parenting of Geometry node in Houdini. I thought it wouldn't be a big deal at the beginning. However, the contents behind this node are much more than I expected.

Let's take a look at what happened during my experiment.
First I created a parent geometry and applied a scaling in the Y direction. Then I connected a child geometry to it. As we know, Houdini would automatically match the transformation of the child to the parent. As it operated, I got the handle on the child squashed showing as below:

It is not a problem since we can fix it by using the clean transform option in geometry. By doing this, I solved the handle squashing problem for some child, which means I can apply a scaling on the child, and its handle appears correctly. However, the solution didn't apply to all children; some children got more handle squashing on it.

After tweaking a bit on the experiment, I noticed that the order of connecting the child to the parent caused the wired squashing. For better demonstrate the problem, I created two instances to reproduce it as below with the operation steps I took:

Step.1: I created a parent box and applied the scaling 0.5 in the Y direction.
Step.2: I checked on the "keep position when parenting" option for two children, namely, child A and child B.
Step.3: For child A, I used the workflow that I mentioned above, and I got the right result.
Step.4: For child B, instead of connecting B to parent box, I scaled it by 0.2 first, then connected it to the parent box and cleared the transformation at last.

As a result, A brought me what I expected, but therefore,the handle scaling of B was squashed more than the status before applying clean-transform operation. (check the following video see the whole problem reproduction)

Apparently, the operation that applied to A is the right way to implement child scaling without affecting by the parent. However, the question is why different operation order make a different outcome?

The pre-transform uses a fixed, non-configurable transform order. If you try to copy a non-uniform scale into the pre-transform, you can get shearing."
(Houdini 17.5 documentation: Working with objects, Pre-transform section)

The answer is pretty straight forward. For B, because I added scaling to the child box on Y-axis before connecting it to the parent box, so I got it shearing.

I came across the word "Pre-transform" from the answer. So what is pre-transform? What a kind of role is it playing in the geometry at the object level?

To better answer this question, we should figure out how HOUDINI handles those data. The process involves some stuff which we are going to spend some time to discuss: world space, local space, and pre-transform.

The picture shows an example with/without "keep the position when parenting" in translation, it is playing addition and subtraction between translation vectors. However, we should notice the position of the two boxes changed in the different space, respectively. 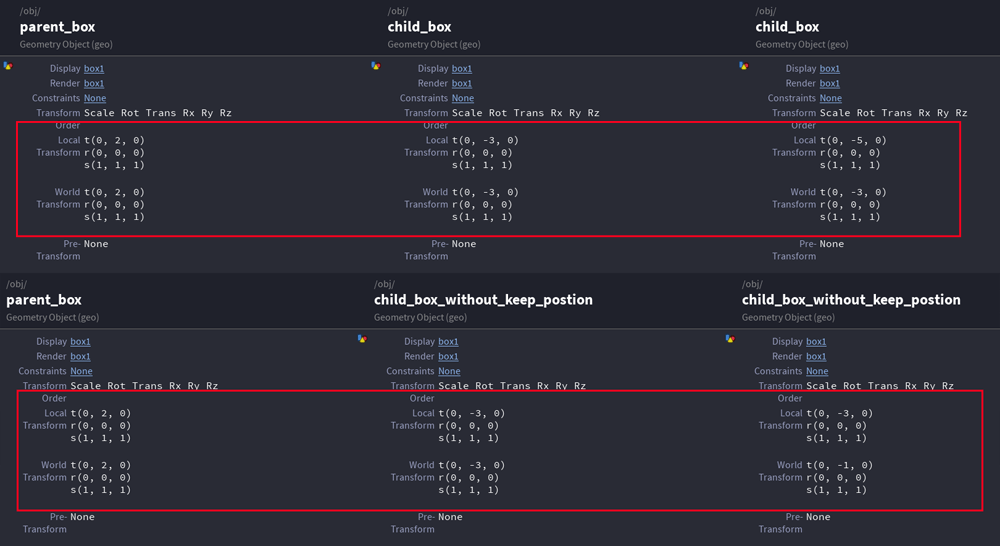 There are three major operations that allow us to manipulate the Pre-transform:

These operations are useful if you need to swap the transform info frequently.

So far, from my understanding, the non-uniform scaling can't be applied to the child correctly when parenting. I will spend some time to figure out what is going on behind the limitation.

If you want to perform non-uniform scaling on the child, use clean transform to zero the child's position in local space first. Otherwise, you may find the parent's scaling would cause the child shearing.