Some Notes for Smoke and PYRO

Learning PYRO in Houdini is not an easy task. Unlike the SOP, it is established based on the real physic model. For a better understanding of how PYRO works, We have to know what is behind the scene.

The field in Smoke / Pyro solver

Let take a look at the difference between the two methods. For example, suppose we have smoke moving in the air:

The Lagrangian perspective thinks the whole air as a static "container." The moving smoke is consists of tons of particles(like point cloud). They are moving independently, but affect adjacent particles at the same time. We store some information on per-particle (such as velocity, temperature, color) to control how the smoke moves. Analysis information that applied to those particles is sample since we only need to focus on tracking the particles individually from beginning to end. However, in fluid dynamics, calculate all the interactional data is impossible due to the insane amount of particles, especially when we try to keep the mass conservation in the movement.

Instead of taking all particles into account, the Euler perspective chooses to use the "field" to describe how smoke moves, that is, dividing the specified domain into the amount of 3d cells, which is called voxels. Each voxel store the data we need to describe the current status of the smoke. If we want to describe the whole movement, we have to update the data in each voxel every step(yep, it is the step we saw in Houdini). The updating process is called advection. It is much easier to provide mass conservation under Euler's viewpoint because we are no longer need to calculate the interaction forces between the units; The calculation has been reduced to the voxel level. That is, for every voxel, we have mass conservation if the amount of gas entering and exiting in the voxel were equal.

The Drawback of Euler's Method

The drawbacks of Euler representation are we lose data all the time during the simulation; that is a significant compromise when we use Euler's perspective to interpret the fluid movement.

Through the Helmholtz decomposition, any vector field can be sperate into two parts:

In Euler's method, the Conservative vector field has been ignored, and it is the reason cause the simulation to lose data. For example, suppose we advect density by velocity. If the density exists between two voxels, to get the advection result, we need to perform some interpolation on both density field and velocity field. Thus, any details that exist between the two voxels have been blended.

Mass conservation here means the amount of gas entering and leaving some arbitrary volume must be equal. It is the prerequisite if we want to use Navier–Stokes equations and Newton's second law to interpret the smoke movement.

In Houdini, the model of a single voxel is called MAC-Grid(Marker-and-Cell Method, developed by Francis H. Harlow, J. Eddie Welch in 1965). In the model, velocity plays a primary role in maintaining mass conservation. By default, the MAC-Grid samples scale field(such as density, temperature, pressure) in the center. However, for the velocity, each voxel samples its components from different three cell surface(see pictures below). 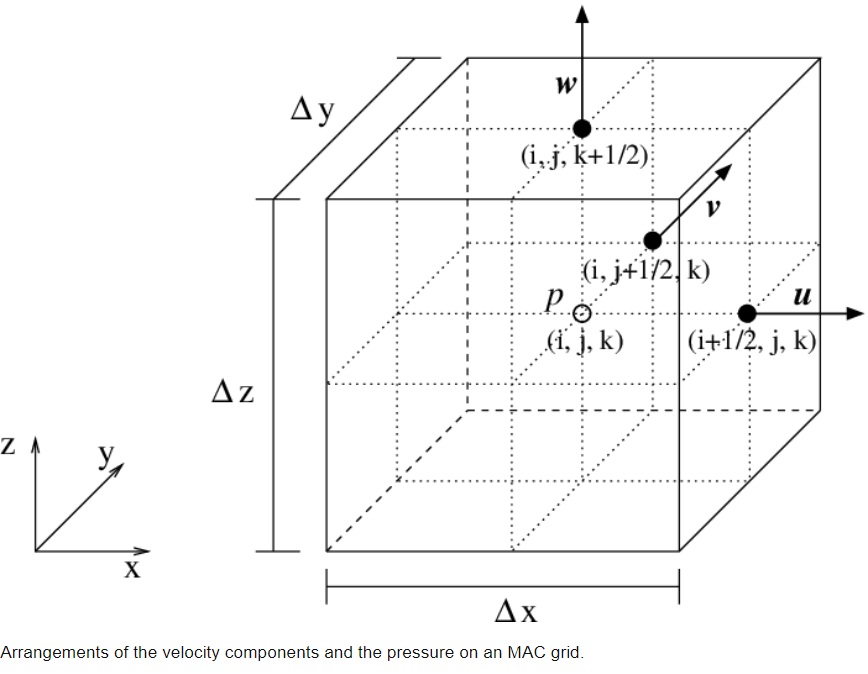 At this point, velocity is used for defining the amount of matter entering and leaving the voxel. The velocity at the location where it was sampled defines how many matters enter the voxel; the velocity was sampled from where faces they leave defines how many matters leave the voxel. The difference between the input and output is called divergence. To maintaining mass conservation, we have to provide zero divergences for the whole simulation.

After understanding all the aspects above, we can make some simple conclusions:

When we put all voxels together, the information from all voxels consists of a data flow, and we call it fields. Fields are the key that we use to control the entire movement of fluid in a specific space.

Depending on what kind of data we stored in voxels, fields have different types. In general, if we look at fields in data form, there are mainly two types of fields:

By combining all the fields, we can finally describe how fluid behaviors in our simulation.

Now we have the container for store the data. The next question is, how can we utilize the data to approach a simulation?

The Mass conservation one tells the fact that the simulation in Houdini is under incompressibility condition, which is the zero divergences that we discussed before. In Houdini, the Gas Project Non Divergent node can be used to remove any divergent parts in fields.

The second one in which implying momentum conservation is a little bit more complicated, but generally, it is another form of Newton's second law. In this part, we can do a little modification on it.

As we know, acceleration is the time derivative of velocity. If we only leave the acceleration on the left of the equation and comparing to the equation we all familiar with, we could find something interesting:

From the picture above, it is easy to discover that the Momentum conservation part tells us fluid accelerates affected by forces and can be explained well by Newton's second law. Let's take a look at what is exactly on the right-hand side of the equation:

It actually can be divided into four parts:

As we mentioned, advection is the updating process of fields. Self-advection can be described as not only field drives the motion of the fluid, but also itself. For example, let say the velocity field causes the fluid moves, and as a result, the moving fluid will go back to update the velocity field too.

In Houdini, the Gas Advect mircoslover can be used for advecting fields based on an existing field. If we have some interaction between fields, The Gas Calculate node can be used to copy information from one field to another.

The diffusion controls how velocity propagates from the source, and the viscosity is the key parameter to determine the propagation speed.

This part can be considered as a combination of all external forces, such as gravity. In Houdini, we can even put more force on it, like wind, drag. We can also add our custom fields to generate new force.

the pressure is used for describing different pressure between high-pressure areas, and low-pressure areas generate a force to push the fluid move. The gradient of the pressure field represents the force. Of course, the force implies how fast the property changes in the field.

How Houdini Process it?

Since N-S equation hasn't been proved that it can't be solved(so far) analytically, Houdini used some numerical methods to approach the result. The method to solve the equation in Houdini is called splitting, that is, separate the equation in several portions, then solve each by using finite difference method. Generally, it has 3 steps:

Besides, we also need a place to store the simulation, and also a way to import our source. Thus, the whole process can be described as follows:

The only difference between smoke solver and pyro solver is pyro solver has its composition model. It is easy to understand once we know how Houdini processes the fluid simulation.

Generally, the combustion model is a bunch of fields advects each other and manipulate the property inside the fields. You can see the general process as below:

Another issue that can be also found is turbulence on the smokes. The turbulence just continues to break itself on the surface, that cause we have big mushroom effects on the fast-moving parts and make the smoke turbulence looks like it never coming from inside of the explosion.

I didn't come up with any solution to the first issue by just tweaking the parameters on the pyro solver. For the second problem, it can be fixed by animating the turbulence. However, we can modify the fields to make the simulation more realistic.

In this customized, we are able to create everything for combustion based on the density field. The smoke solver will be used for the basic shape of the simulation, and the details will be added to the basic shape by creating and blending existing fields.

The basic idea is generating the density gradient field recursively, and blend it with current velocity field ever step. By doing this is we can obtain some benefits:

It is worth to mention that the blending field operation can be implemented by using Gas Calculate node. Creating the rest of the steps is just as easy as we discussed before:

Calculate the gradient of density

The first thing we need to build is a custom velocity fields. The new fields we will create is density gradient fields, and it will be blended with velocity fields finally.

Adding the noise to the gradient field

Noise is one of the crucial methods that we can add details to the volume. In this case, the noise is applied to the gradient field directly by using the Gas Field Vop node. The node allows us to do some math computation inside the DOP like general VOP networks.

It is also good practice to normalize the field before adding any modification on it:

For adding even more details, we can also stack multiple noises together as well. It is good to start with one noise to get a basic shape. Once we satisfy with it, we could add more noises to it to break the pattern into smaller pieces. Besides, we could also add the different offsets to each noise as well; it going to help random the details as well.

Sometimes it is good to have more control in different areas of fields. In this case, Adding different noise to the different density gradient field area would be a good idea. For example, when the source is staring to emmit, the speed and temperature are at a high level. A high-speed movement would cause less variation in the volume. Thus, it is necessary to isolate the fields based on velocity.

At this point, a dot-product can be utilized for the separation. The Gradient field of density implies both the direction and speed of the field. If we use it to make a dot-product with the current velocity field, the result could be between [-1,1]. The value which is less than zero will be in the opposite of the direction of the velocity and vis Versa.

On the other hand, it is also good to use the separated field to control the dissipation.

The reason to use the curvature field to generate the temperature field is, it is easy to obtain the "cracks" between the large mushroom of volume. In real-world reference, the most high-temperature area comes from the "cracks": 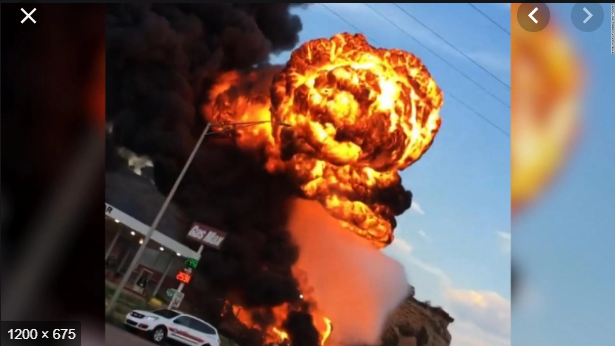 It is easy to isolate the cracks by calculating the curvature field. Those cracks have a higher value in the curvature field, thus we can pick them up by using the color ramp technique we discussed before. The selected curvature field is showing as the red area in the below picture, which is perfect for representing the temperature field: 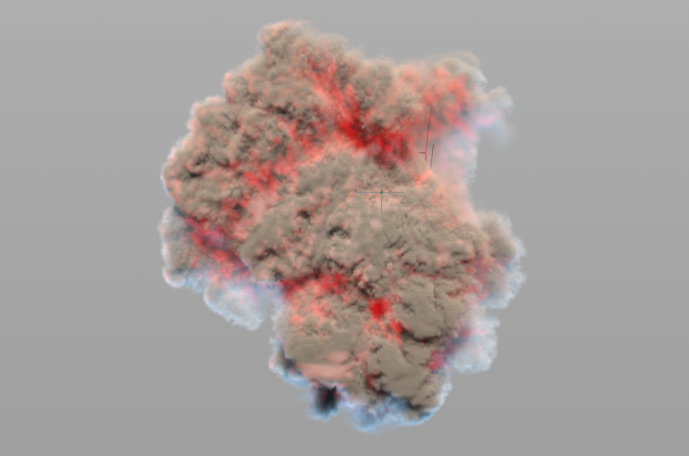 Adding blur on the curvature field would help make the cracks more visible. The Gas calculate node can be applied to turning the curvature into temperature.

It is also worthwhile to have three improvements for the loop: